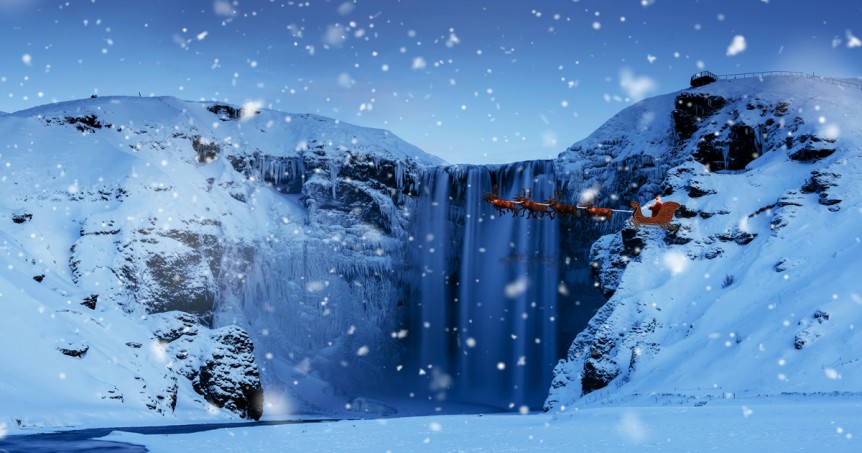 While you may think that spotting Santa in the North Pole is an easy task. We can assure you it isn’t always so simple, not even for the team here at I Spot Santa. On location here in Peppermint Falls, North Pole and we have been waiting to hear those sleigh bells.

It is so pretty here in Peppermint Falls. As you can see even the waterfall is frozen solid. We are also happy to report. That field reporter Kent Cook has confirmed that the Peppermint Falls are NOT made out of real peppermint candies.

We know that while Santa does live here, Santa is also a very busy man. He is always working to make Christmas special and flying around the world to deliver gifts to good children.

We stationed ourselves at Peppermint Falls because it is so close to Santa’s Village. However, Santa’s Village can only be found by those that Santa wants to find his village. And they can only see it for a short period of time. He can’t give away too many secrets about the magic of Christmas!

While we’ve been waiting up here at Peppermint Falls, we have learned a lot about the North Pole!

The good news is, all of our waiting really paid off here at Peppermint Falls. As you can see in our picture above.

At the North Pole Santa was Spotted

We saw Santa take off from his village to take a quick joy ride around the North Pole. After all, Dasher, Dancer, Prancer, Vixen, Comet, Cupid, Donner, Blitzen and Rudolph all need their exercise. This way they can stay in shape for the big night on Christmas Eve. We think this is what Santa was doing when we captured him flying around Peppermint Falls.

We will continue to scout out Peppermint Falls and update you on all of our Santa spotting here in the North Pole. Stay tuned for more accounts of Santa!