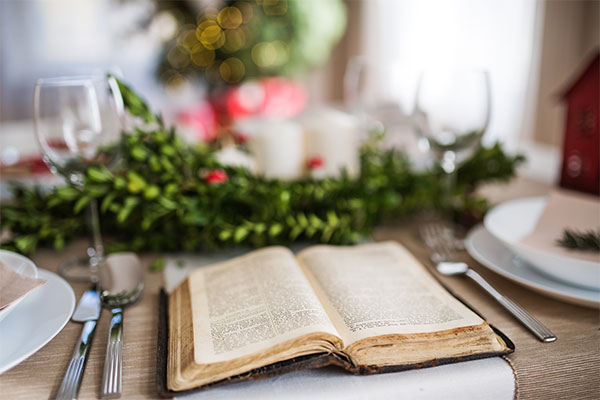 Everyone knows that Christmas is a day dedicated to the birth of Jesus Christ. We also know the wonderful Christmas story about Jesus being born in the manger. But why is this holiday on December 25th? After all, there is no real way of knowing the exact date of Jesus’ birth.

There is no mention of the date of Jesus’ birth date in the Christmas story in the Bible. In fact, there isn’t anything in the Bible about the day or the time of year that Jesus was born. Also, early Christians didn’t even celebrate Jesus’ birth.

So, how come we celebrate on this date?

There is a lot of speculation about the December 25th date, and a lot of theories about why this date is the date we celebrate Jesus’s birthday.

While we may never know about the real date of the nativity story. There are a few theories as to why this date was chosen to celebrate Jesus’ birthday.

Let’s start with a brief history of the story of Christmas and how the name of this holiday first even came to be.

Why is Jesus’ Birthday Called Christmas?

No where in the Bible, is Jesus’ birthday ever called Christmas. In fact, to be particular there are no real Christmas stories in the Bible—because the term Christmas didn’t even exist yet!

Before we look at the date Christmas is celebrated, it is important to look at what the word Christmas means. As the two are connected and are both important components of the Christmas story.

The name Christmas is a shortened term that comes from “Mass of Christ.” Mass is a time for Christians to remember that Jesus died for his people and then came back to life.

The Christ Mass was always a special mass. As it was the only one every year that could take place after sunset, but before sunrise on the next day. Many Christians would hold this special mass starting at Midnight, which is how all of the traditions surrounding Christmas Eve first began.

Today, Christmas is celebrated by people of all different religions from all around the world. While any day could technically be a day to celebrate friends and family, Christmas Day is always December 25th. And there are a few theories as to why.

The Christmas Story Has Historical Relevance

One of the most common explanations of why Christmas is on December 25th—is the most obvious—because the history books said so. This is a story about Christmas that has a lot more to do with politics than Biblical tales. Still, it is a theory about the date that is worth exploring.

Before the officially December 25th holiday was established, around the year 273, the Christian church started discussing the idea of commandeering some of the existing festivals that already had most of the public hosting major celebrations.

This included the Pagan Festival of the Winter Solstice, the Birth of Unconquered Sun and the birthday of Mithras, all of which were celebrated in December.

Correlating these Pagan celebrations with Christmas are important. Historians found that there were early celebrations honoring the “birth of the Sun” on December 25th. So putting Jesus’ birthday on this date was an attempt to transfer the public’s devotion from “the Sun” to the son of God.

The first recorded Christmas celebration on December 25th was recorded in 336 AD. During this time the first Christian Roman Emperor, Constantine, was in charge and declared this was the day to celebrate the birth of Jesus. However, it did not become an official Roman holiday at this time.

While this may not be a fun Christmas story for kids (after all, most kids don’t love history lessons) it is a well-respected theory on why Christmas is the day we know it as now.

There is a very early Christian tradition known as the Annunciation. This holiday is on March 25th—and it is still celebrated in some churches today. The Annunciation celebrates the day that Mary was first told that she would immaculately conceive God’s child.

This is why, nine months later is determined to be Jesus’ birthday.

This isn’t the only thing that makes March 25th special either. There are some early Christian teachings that claim the world was made on March 25th and some that claim Jesus died on this day as well.

Another popular time to celebrate the birth of Jesus was with the Epiphany, which was on January 6th.

In fact, many historians believe that around 200 A.D., until 273 A.D. January 6th was the day to celebrate Christmas. This is because the assumed date of Jesus’s death was April 6th, and there was an ancient belief that all prophets died on the same day they were conceived.

The Christmas Story Correlates With the Winter Solstice

This is one of the most recognized reasons why Christmas Day is celebrated on December 25th. The Winter Solstice is the day where there is the shortest time between the sun rising and the sun setting.

Typically, it doesn’t happen on the 25th, but closer to December 21st and December 22nd. For the Pagans, the Winter Solstice means that winter was over and that spring was coming—meaning there was a big festival to celebrate this time of year and to worship the sun for beating out winter.

Historians that have looked into the history of Santa Claus or Saint Nick found that Santa is based on a religious man named Nicholas. Nicholas was born in the third century A.D. in the village of Patra (modern day Turkey).

Nicholas’ parents died when he was young, and he was left a fortune. When Nicholas became ordained as a priest, he used his money to help others. To protect children and perform miracles to help young people in need.

He was persecuted in December 343 A.D., and the day of his death became one of celebration. It was to honor the kind man and all he did for children. This is not one of the Christmas stories in the Bible, and most people believe that the date of Saint Nicholas’ death was actually December 6th. This is why in Western Christian countries, Saint Nicholas Day is on December 6th.

However, in Eastern Christian countries, they celebrate the feast day of Saint Nicholas on December 19th. Some believe, that in order to honor Saint Nicholas and his role in the popular modern day Christmas story. Another date in December was chosen that didn’t take away from his official holiday.

The bottom line is, no one is 100% sure why December 25th was chosen as the date to celebrate Christmas. Today it is hard to imagine celebrating this holiday on any other day!

Throughout history, it became more and more common to celebrate Christmas Day on December 25th. No matter where different accounts believe that this date comes from. Modern civilization has been celebrating Christmas on December 25th for a very long time.

As this spread throughout western culture, it eventually became an official, federal holiday in 1870. Of course, today it is the most widely celebrated national holiday and one that brings the most cheer to families across the world.

In Conclusion: Why is Christmas on December 25th?

There are so many theories on why Christmas Day is December 25th. Which of these Christmas stories and theories have you heard before? Let us know in the comments below and Merry Christmas to you!