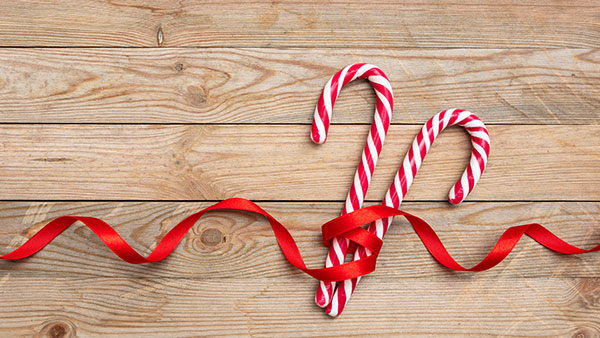 Every Christmas stores and candy counters throughout the country are suddenly filled with bright, red and white striped candies. The Christmas candy cane has been a symbol of the Christmas holiday for many years. It is one of the most recognizable symbols of this holiday. While we may love these sweet treats, very few of us know where candy canes came from. Or where their history dates back to.

This is why we are going to take a look back on the past and see where the candy cane first came from. And how it grew into being one of the most popular symbols of Christmas.

The History of the Christmas Candy Cane

Most people associate canes with the original “candy stick” that first became famous in 1837. During an exhibition in Massachusetts, these straight white sugar sticks became a popular fixture among those attending the fair. Not to mention throughout the greater Massachusetts area.

At first, these sugar sticks were all white, and eventually the red stripes were added. The first time these candy sticks were called candy canes was in 1866. The original recipes for the candy cane was very sweet! It literally just had these treats being made entirely of sugar and they had no peppermint flavoring.

The Candy Cane and Christmas

However, one of the most popular and recognizable stories states this association dates back to 1870 in Wooster, Ohio.  According to Spangler, a prominent American candy cane manufacturer. A man by the name of August Imgard decided to cut down a tree to decorate his brother’s house. This was a common practice in his homeland of Bavaria.

In an attempt to decorate the tree, he used candy canes and hung them from the branches. This is one of the reasons these candies are so popular around Christmas!

The Popularization of Candy Canes

While there is a long history of candy canes that dates back to the 1800s. These candies first really became fixtures in popular culture thanks to a man by the name of Bob McCormack. In 1920, this Georgia man started making candy canes for his friends and family.

As these delicious candy canes started becoming more and more popular, Bob created his own business. He named the company Bob’s Candies. Together with his brother-in-law, Gregory Harding Keller (a Catholic priest). Bob invented a machine known as the Keller Machine to help with production.

This machine not only made it faster and easier to make these candy canes. But to save time it made the straight sticks into the curved shape automatically. Bob’s Candies became one of the biggest manufacturers of candy canes in the world. Then in 2005, the company was purchased by Farley and Sathers.

No worries, candy cane lovers! The company, although now bigger than ever, still makes their famous candy canes.

Candy Canes and The Shepard

There are many facts about Jesus and Christmas, like why Christmas is celebrated on the 25th. Let’s see what Christianity and Candy Canes have in common.

Most people know that candy canes are associated with Christmas, but they also are thought to have some special symbolism. Particularly when it comes to the signature shape of the candy cane.

The most popular myth about the shape of the candy cane is an old Christian tale. This tale states the candy cane is supposed to represent a shepherd’s crook. According to the legend, a German choirmaster was worried about children sitting quietly through church and the Christmas nativity service. He gave the kids something to eat to help keep them quiet during the long service.

In order to remind the children of the shepherds that visited baby Jesus during his birth. He made them candies into the “J” shape that looked just like the shepherd’s crook. However, most people think that this story is just a legend. There is no real proof that this is where the shape of the candy canes came from.

Other people believe that the “J” shape of candy canes stands for Jesus. According to those that believe this symbolism of the candy canes. The white part of the candy represents the purity of Jesus. The red is meant to symbolize the sacrifice he gave when he died on the cross.

There are even some that believe the peppermint flavor that candy canes are supposed to represent the hyssop plant. That was a popular mint plant talked about in the bible that was meant for purification.

Of course, there are just as many people who simply think that candy canes are just a delicious minty treat. Either way they are fun to eat during the holiday season! Now that you have candy canes on the brain. Next time you go out to enjoy one of these sweet treats during the holiday, you can also enjoy a better appreciation for the candy cane and all that it symbolizes.