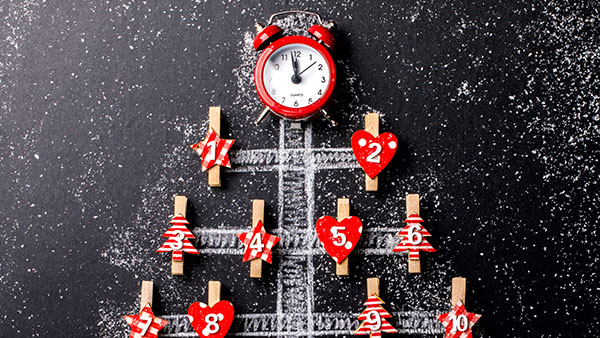 Advent is one of the biggest religious traditions surrounding Christmas and is a popular way to count down the days until the big day arrives. Officially, this is the period of Sundays and weeks before Christmas. And it has a long and interesting tradition of why we use this countdown to mark the birth of Jesus.

What Does Advent Mean?

The word Advent actually means “coming” in Latin. As this period of time is meant to mark the “coming” of Jesus into the world. During these four Sundays and the weeks of Advent. Christians take the time to look back on Jesus’ arrival into the world. They even encourage themselves to remember the real meaning of Christmas.

While the word does translate into “coming.” There are actually three different meanings of the term “coming” that you should be aware of regarding Advent.

The first and most prominent “coming” happened when Jesus came into the world. Born as a baby to live as a man, before dying for the sins of people.

The second “coming” can happen at any time and can happen now. As Jesus tries to come into our lives to help us be the best people we can be.

The third “coming” is the one that will happen in the future. When Jesus comes back into the world as King and Judge, as he rises again.

Now that we know what the word means…

When Does Advent Start?

The official start date of Advent is supposed to be “around” the 1st of December. “Around” because it all depends on the calendar. Advent Sunday can be any date from the 27th of November to December 3rd. In 2019, Advent Sunday actually took place on the 1st, which happens when Christmas is on a Wednesday.

In some specific religions, Advent lasts for exactly 40 days, and will start on November 15th. These religions, including Celtic Christianity, it is also known as “Nativity Fast.”

While it is a long-standing Christian tradition, there is still some discrepancy on when and where Advent first started. Most people believe the concept dates back to at least 567 AD. That’s when monks were ordered to fast the month of December leading up to Christmas.

While most people don’t fast like this during Advent, some religions will. This is a way to help them concentrate on celebrating Jesus’ coming. Orthodox Christians typically don’t eat meat and dairy during Advent.

There are two primary ways to count down, or to mark the different days. Advent candles (which we will talk about later) and Advent calendars.

There are so many different types of advent calendars out there. The most popular are the ones made of card stock that have 24 or 25 different windows on it. These calendars are popular in the UK and USA. You can find them in most stores during the holidays.

Each of the 24-25 days, you open up the little windows to reveal a picture. Some of these calendars even have little candies or gifts under the windows as well.

In the 19th century, Christians in Germany would use chalk lines to mark the days in Advent. While others use fir wreaths with bags or boxes hanging around them.

Now, people can get very creative with their Calendars and all of the different ways to countdown the days until Christmas. It is a fun way to get everyone, particularly kids excited for the holiday to come.

Advent candles are another popular way to countdown to Christmas. Traditionally, these candles are placed in a wreath known as the Advent Wreath that is filled with greenery. There are four candles in this wreath—each representing the four weeks of Advent. One candle is lit every Sunday.

Three of the candles are purple and one is pink. Purple is the prominent color because it is a liturgical color that reminds us it is a time of prayer.

1st Candle (Purple)- This first candle is lit on the first Sunday of Advent. It symbolize hope. Some people call it the Prophecy Candle to pay homage to the prophets who foretold the birth of Christ.

2nd Candle (Purple)- On the second week of Advent, you light both the first and second candle. This second candle represents faith. It is sometimes called the “Bethlehem Candle.” It is supposed to remind us of the journey that Mary and Joseph took to Bethlehem before the birth of Jesus.

3rd Candle (Pink)- The third week of Advent you light the pink candle. It is known as the “Shepard’s” candle and it symbolize joy. In fact, the liturgical color rose means joy. This Sunday is known as Gaudete Sunday. Which is a time where we remember all the joy the world experienced when Jesus is born. We are also supposed to be joyful that we have reached the midpoint of this tradition.

4th Candle (Purple)- The final week of Advent we light the final purple candle. This is to mark the last week of prayer and penance as we wait for Christmas. This candle known as the “Angel’s Candle” symbolize peace. It is supposed to symbolize the message of the angles to have peace on earth and good will towards others.

5th Candle (White-Optional)- There is also an optional white candle, that is becoming more popular in modern celebrations but wasn’t used traditionally. This candle is called the “Christ Candle” and it represents the life of Christ. It is white for the purity of Jesus Christ who was pure and sinless.

There are many people who recognize and even celebrate Advent. But who aren’t as familiar with the different traditions and history of this celebration. Now that you have a better insight, we hope you also have a better appreciation for this important time of year.

Do you use an advent calendar or candle? We would love to hear about in the comments below. If you want to know more Christmas facts, check out our definitive guide on the Candy Cane or 12 Days of Christmas.