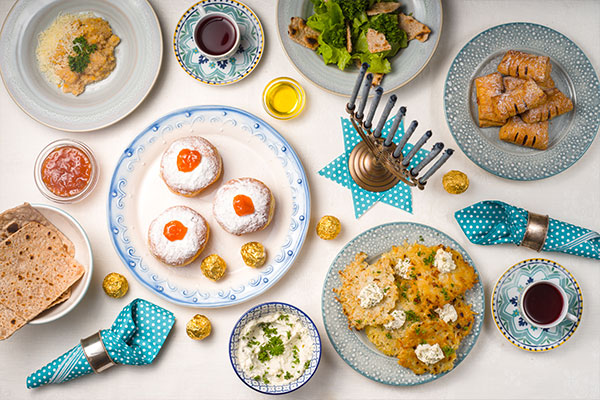 Wondering, what is Hanukkah? If you aren’t inherently familiar with this religion, then you may have some questions about Judaism’s biggest holiday—Hanukkah. The good news is, we have created a comprehensive guide for you on all things Hanukkah related. So you can gain a better understanding and hopefully a better appreciation for this beautiful holiday.

So, What is Hanukkah?

Hanukkah is an eight-day Jewish wintertime festival, also known as the “festival of lights.” The holiday is celebrated nightly with the lighting of a menorah, special prayers, fried foods, and many times gifts. The holiday is a celebration of the liberation of oppression.

In Hebrew, the word Hanukkah is spelled Chanukah and translated it means “dedication.” It was given this name to honor the rededication of the Holy Temple (more on that later).

The History of Hanukkah

So, what exactly does Hanukkah commemorate? You need to take a look at Jewish history to gain a better understanding of what this holiday celebrates.

In the 2nd century BC, the Holy Land was ruled by Syrian-Greeks also known as the Seleucids. At this time, the Seleucids were trying to force the people of Israel to accept Greek belief and culture.Instead of their existing beliefs in the mitzvah one of the Torah’s Divine commandments. Which celebrates a bond between God who commands his people and man who performs his commandments.

However, despite this attempted rule. A small band of faithful Jews led by Judah and Maccabee defeated one of the largest armies in the planet. The Greeks were driven out of the Holy Land. This group then reclaimed the Holy Temple in Jerusalem and rededicated its service to God. This is where the name Chanukah, or rededication comes from.

However, when the group was ready to light the Menorah in the Temple as part of this rededication. They only found a single cruse of oil that wasn’t destroyed or contaminated by the Greeks. Even with a single-day supply of oil, they were able to keep the menorah burning for eight days. This lasted until they could prepare new oil for their temple’s Menorah.

This is how Chanukah was born—as a way to honor these miracles. Hence why the festival goes on for eight nights and why the menorah is lit every one of those nights.

Hanukkah is on different dates every year. It starts on the Hebrew calendar date of 25 Kislev and lasts for eight days. It always falls primarily in the month of December.

Hanukkah is observed every year as a way to celebrate these miracles that happened so many years ago. The celebration lasts eight days with all of the events traditionally happening in the evening.

The Lighting of the Menorah

At the center of this eight-day holiday is the nightly lighting of the menorah—which holds nine flames.

The household menorah is supposed to be placed in the windows or doorways of the home. When lit, so that others can see the light of the menorah.

How do you light the menorah?

One of the flames, the shamash, of the attendant, is used to kindle the other eight nights. One flame is lit the first night, the second night an additional flame is lit, and so on. Until the eighth night of Hanukkah, when all of the lights on the menorah are lit.

There are two different philosophies on how the menorah is lit and in what order. But the most common is the philosophy sponsored by Rabbit Hillel over 2,000 years ago. This approach states that you should begin with one candle and light an additional candle each night. You place the candles in the menorah from right to left and you light them from left to right.

One of the other, although less common, approaches to lighting the candle is a little different. It states that you should light all eight candles the first night and remove one each night of Hanukkah. This is a less common approach that related to the holiday of Sukkot (another 8 day Jewish celebration).

Before the flames are lit, a special blessing is recited and afterwards. Participants will sing traditional Hanukkah songs.

It is important to eat foods that are cooked in oil (which includes many fried foods). This is a way to celebrate the miracle of the oil and how it keeps the menorah burning for eight days.

Some of the most popular fried foods served at Hanukkah include latkas or livivots, which are fried potato pancakes. Doughnuts are another popular treat during Hanukkah as well.

During Hanukkah, on the Sabbath, it is tradition to read the story of Judith. According to the legend, Judith was a great beauty and bravely saved her village from the Babylonians. When her village was under siege, Judith charmed here way to the Babylonian’s camp holding cheese and wine. She gave the enemy’s general Holofernes as much wine and cheese as he wanted.

Once Holofernes was drunk and passed out, Judith beheaded him with his own sword. Then she brought his head back to the village in her basket to show the Babylonians. This was enough to convince the enemies to flee her village. This is why it is tradition to eat dairy foods in honor of Judith during Hanukkah.

There is other traditional Hanukkah fare served during this celebration as well. While they may not have the same historical significance, they are still traditional dishes you can expect on this holiday.

Next time you head to a Hanukkah celebration, you can expect classic dishes like this on the menu.

The Dreidel and How To Play with One

The dreidel is another iconic representation of Hanukkah and one that many people are familiar with. While many people know what a dreidel is, most people don’t know how to play the dreidel.

Let’s start with the basics. A dreidel is a four sided top, each side of the dreidel has a different Hebrew letter on it. It represents a word from the phrase “Nes Gadol Hayah Sham” which translated means “a great miracle happened there.” It is designed to help remind players of the great miracle that happened in the Holy Land.

Here’s how you play:

In the end, the player with the most pieces wins!

Hanukkah is a beautiful religious celebration! A time for Jewish families to come together and spend quality time with their loved ones. There is a lot to love and appreciate about the festival of lights.