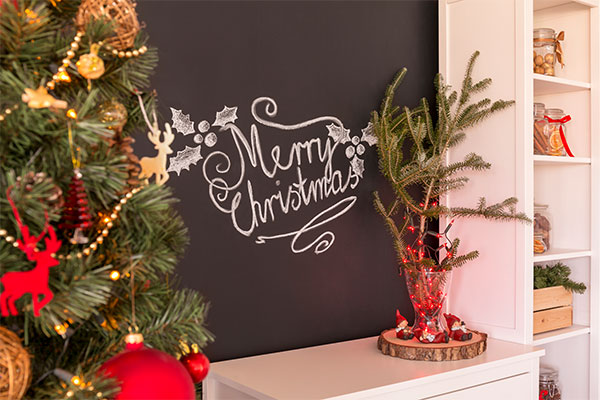 Walk down a festive, holly-trimmed street in December, and chances are you will be greeted with a hearty “Merry Christmas.” Here in the United States, this is the average greeting during the holiday season. Yet, it isn’t like that everywhere else in the world. Merry Christmas or Happy Christmas, why do we say Merry instead of Happy?

Take a similar stroll down the streets of London and you may hear friendly voices wishing you a “Happy Christmas” instead. The same goes for when you turn on your favorite Christmas tunes: We Wish You a Merry Christmas or John Lennon‘s Happy Christmas (War is Over).

Here is a look at where these two terms come from and what they mean.

There is no denying that these two terms are quite similar, and almost identical in nature. They have the same meaning, are similar phrases. Both are about enjoying Christmas…the only difference lies in the beginning adjectives.

Both happy and merry are terms used to describe a joyous and pleasureful situation. They are generally used interchangeably but let’s take a closer look. Once you look deeper at their origins and definitions you will see a few key differences.

Traditionally, the term happy means to be pleased, content and satisfied. However, merry tends to be more of a celebration. In the 18th century, when merry was first developed, it was actually a euphemism for being intoxicated.

People associated being happy with being polite and quietly content and merry with dancing, drinking, feasting and celebrating.

It made sense why the term merry began to be associated with Christmas so often during the 18th century. After a period of time where Christmas celebrations were outlawed by the Puritans. Many people wanted to bring the holiday back to its former glory.

So, influencers of the time looked back to the history of the Christmas holiday. Back to the Middle Ages, when Christmas was truly a holiday that could be described as “merry.” Back then, Christmas included 12 days of feasting, entertainment, singing and celebrating—it was a merry Christmas back then indeed.

The Origins of Merry Christmas

You may be surprised to find that while many people think of “Merry Christmas” as the more modern of the two phrases. The greeting “Merry Christmas” has a pretty long history. By looking at historic literary works, you will see how far back this greeting can be traced.

The term appears in 1534 in a Christmas letter between the Catholic Bishop John Fisher and Thomas Cromwell. Then again in 1565 in a document called the Hereford Municipal Manuscript. Before this, the term “Happy Christmas” was more common. However, in the 17th century, it didn’t mean this was a phrase that was being used as regularly as it is today. In fact, Christmas was illegal and the puritans in England and America panned the holiday.

Christmas was a regular day of work and an opportunity to remember God. Not one to celebrate with feasts and celebrations.

However, things began to change, and the holiday began to become more popular in everyday culture. Then of course did this new phrase “Merry Christmas.”

In A Popular Christmas Book

It was in 1843 when the term was used in Charles Dickens’ A Christmas Carol. This is also the same year that the first ever commercial Christmas card was printed and sold. It contained the now household phrase “A Merry Christmas and a Happy New Year.”

In fact, around this time, in the late 18th and 19th centuries, the term “Merry Christmas” really started to catch on. Especially as the term “merry” continued to become a more common phrase in common English American language.

Charles Dickens was also thought to be a major influencer behind the popularity of this term. His popular story helped usher in new Victorian Christmas stories, myths and traditions. Many of which are still used in modern Christmas celebrations today.

In the U.K. you will find Queen Elizabeth’s II’s annual Christmas address concluding with a “Happy Christmas” to all. This is because “Happy Christmas” is still a widely used phrase in many places—particularly in England.

Many attribute this to the fact that while Americans started to change from “Merry Christmas” to “Happy Christmas” (a term that was brought over from British settlers). The same cultural impact wasn’t happening across the pond. Simply put, those in England didn’t feel the need to adapt to this new American “slang.”

You may hear the phrase “Merry Christmas” around the world, including in England. However, the resilience of the U.K. with this term actually has to do with some of the British upper class. In the 18th and 19th century when Christmas began to be more accepted in popular culture.

Many people started greetings with “Merry” instead of “Happy”—some members of the British upper class thought that the word merry had vulgar connotations. They felt it was a term better associated with activities in the pub not celebrating the birth of Jesus Christ.

However, today, rules on “Merry Christmas” and “Happy Christmas” aren’t so strict. While each of these phrases have a unique history—they both share the same sentiment. They are both wonderful greetings to those you see around the Christmas holiday. So Merry and Happy Christmas to you and your love ones!

If you found this article interesting, you’ll found “Why Christmas is on December 25th” interesting too, the reason surprised us.