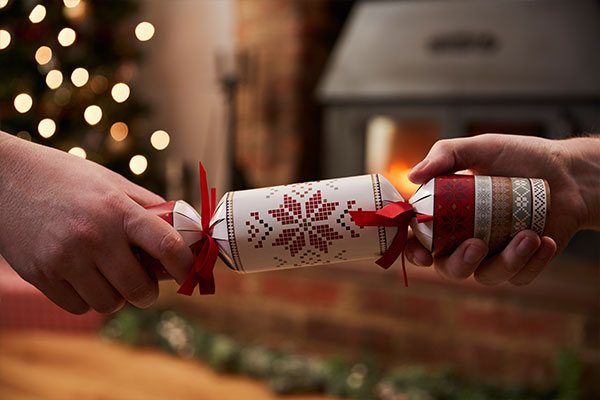 There are a lot of different Christmas traditions from all over the world. One of the UK’s biggest and most notable traditions is the Christmas Crackers. However, this old Christmas pastime is about more than just a fun way to package presents. It has a very interesting and detailed history as well.

Learning more about the history of the Christmas Cracker and how to incorporate it into your traditions of today can be a fun way for the whole family to learn more about the origins of Christmas.

Let’s Start with the Basics

If you aren’t already familiar with Christmas Crackers, let’s take a moment to talk about what they really are. A Christmas Cracker isn’t a salty treat to eat around the holidays, it is actually a way of wrapping presents.

While the Christmas Cracker has gone through a few different models over the decades. The crackers you will find today are made out of short cardboard tubes that are wrapped in colorful paper. The paper is twisted at both ends.

When you pull the end of the cracker, the cracker breaks and a small chemical strip makes a “popping” sound and then the contents of the tube will fall out.

The Legend Behind the Christmas Cracker

There are a few different tellings of the legend behind the Christmas Cracker. However, most of the stories are a version of this tale:

In the mid-1800s, a candy maker by the name of Tom Swift was looking for a way to package and sell his sweets in England. He wanted to make them more fun and enticing for buyers. He was inspired by the beautiful bon bons sold in France at this time. Therefore he wanted to bring that fun to England.

These treats were wrapped in bright bold papers, and had a small riddle or saying inside. However, while Tom thought the perfectly packaged sweets would take off, they didn’t sell as much as he wanted. Determined to find a way to bring an extra sense of joy to all who bought his candies and toys. Tom began searching for an innovative new approach to packaging that would be both fun and beautiful.

While sitting by his log fire, he became entranced about the sparks and cracks that came from the log. It was fun and beautiful—and it inspired him to create his now famous cracking packaging.

These fancy wrappers opened with a crack when they were pulled in half—and quickly the idea caught on. The business even became a family affair. When Tom’s sons took over he kept the tradition and started finding new toys and gifts for these cracker wrappings. There were many themed crackers over the years, including special crackers made certain events, coronations and celebrities.

However, the most popular of the cracker wrappers of course are the Christmas Crackers. These crackers inspired an extra sense of joy and wonder around the holiday season.

The common way to introduce Christmas Crackers into your holiday celebration is to put a cracker next to each plate. It is a great way to end a beautiful evening a food, fun and merriment. This way everyone can open their crackers with a bang and enjoy the colorful toys and gifts inside.

Depending on the type of cracker you buy you may have different items. Including a small toy, a fun gift, a festive saying or joke or even a sweet. There are so many different types of Christmas Crackers out there. However, the most common for the holiday season are the Christmas Cracker Crowns (followed shortly by the popular Christmas jokes).

These fun, colorful party hats are designed to symbolize the crowns of the Three Wise Men from the Christmas story. It’s a great way to encourage children to remember the story of Jesus’ birth around the holidays.

There is also another tradition that actually goes with the opening of the Christmas Cracker. For most families, when they open these crackers, they do so by crossing your arms in a circle. Then they have everyone hold their cracker in their right hands. The next step is everyone pulls their neighbor’s Christmas Cracker with their free left hand at the same time. So everyone gets to enjoy their surprise at the same time!

Many people love Christmas Crackers for the jokes that are inside. Originally, the crackers had romantic poems inside. However, in the 1930s, to make sure these crackers stayed fun and popular with children. The creators replaced these romantic poems with corny, “bad” jokes.

This is a fun tradition for kids and families alike. These jokes are known for being lighthearted, silly and a bit corny. So in honor of that tradition here are a few of our favorite Christmas Cracker jokes.

Do you smell carrots?

Because he’s so fun-gi to be with.

Because they always drop their needles.

He pulled a cracker.

These are the type of fun jokes you can find in your Christmas Crackers. Comment below if you have found any other great Christmas Cracker jokes in the past. And if you like these jokes check out our 101 Best Christmas Jokes For Kids, here.

Never tried Christmas Crackers? There is no better time to give this unique, fun holiday tradition a try!

If you have never tried the fun of Christmas Crackers before you should. Make an old tradition a fun new addition to your holiday celebrations. Whether you choose crackers with gifts, crowns, sweets or jokes. This is sure to be one fun way to celebrate Christmas with a bang!