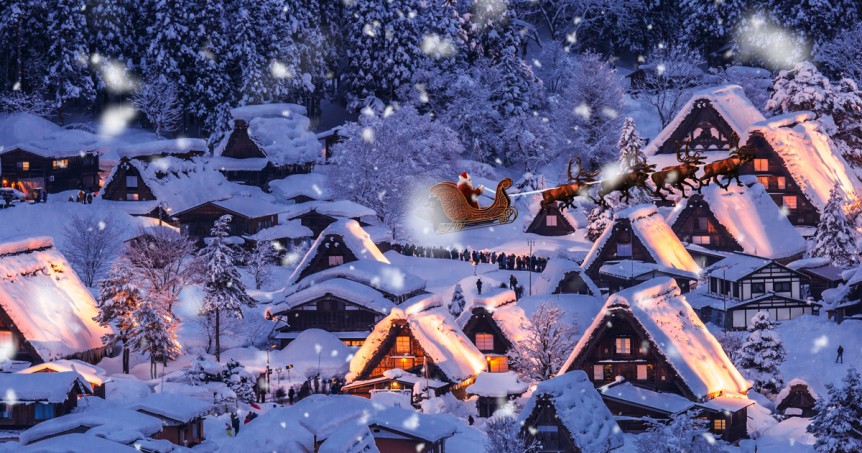 Located in the heart of Japan, many people know this town for its beautiful buildings. Which are home to many good girls and boys who wait patiently on Christmas Eve for Santa to come. In this photo of the beautiful Shirakawa-gō village Santa Claus flies in to make a stop Christmas Eve. Christmas in Japan just got more exciting thanks to our video elf, Bing and his camera.

Just take a look at the photo above. See how stunning Japan can look under a coat of snow in the winter. While Shirakawa-gō may have lots of snow during the holiday season—it doesn’t mean that will stop Santa from flying through. He makes sure that all of the little boys and girls in the village can get their Christmas gifts.

Do They Celebrate Christmas in Japan?

If you’ve never celebrated Christmas in Shirakawa-gō, Japan before, you will learn this community gets excited for the holiday. In fact, Christmas is still a relatively new holiday in this village. Not to mention, that it has only been celebrated in Japan for the last few decades. In Japan, Christmas is not seen as a religious holiday, but instead a fun time for family to get together. The United States loans out many of their traditions to Shirakawa-gō for the Christmas celebration. Not to mention all the rest of Japan.

Here are some of the traditions you will find in this Japanese village:

A Disney Christmas in Japan

Did you know, many children will spend their Christmas holiday together with family. Another popular place to go for Christmas in the area is Tokyo Disneyland. Disney throws a massive celebration during Christmas that is fun for the whole family.

Here at I Spot Santa, we are dedicated to spreading holiday cheer all year long. Most importantly to children all over the world—including those in beautiful Shirakawa-go Japan. Around the world, families from across the globe have their own unique Christmas traditions and celebrations. We love educating families about the traditions that are celebrated around planet on Christmas Eve. What are yours as your household waits for Santa to arrive? Let us know in the comments below. Check out over 100 other Santa Sightings including photos and videos here.