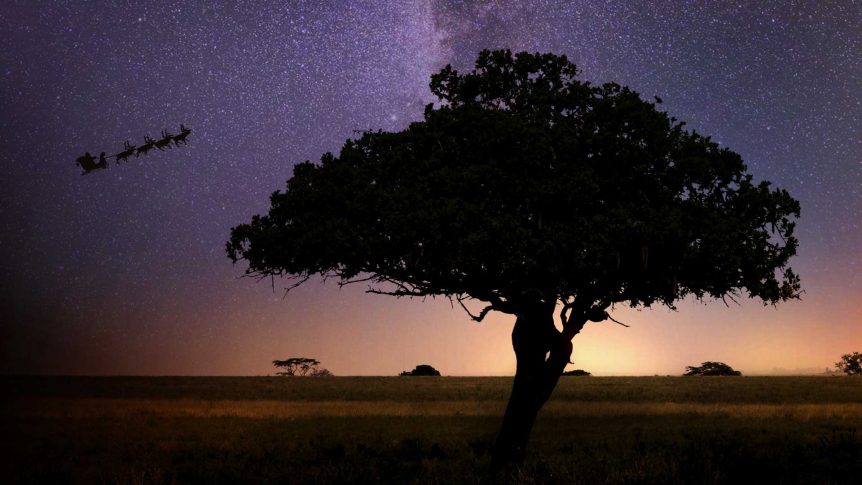 An amazing Santa Sighting in Africa! Nigeria is Africa’s largest populated country with over 186 million inhabitants, which makes it one of Santa’s longest stops at the continent. While English is the official language in Nigeria, there are over 500 indigenous languages and Santa Claus knows all of them. Lagos is the most populated city in Nigeria but this Santa picture was captured outside of the city in the wild. Our video elf Charlie spent the night in a sleeping bag with his camera pointed to the sky. When he heard the bells of Santa’s sleigh he jumped up and took this picture of Santa.

Charlie took the Niger River, which spans 2,600 miles to his destination and then took the rest on foot. TheNiger River is the third largest river in West Africa and is home to hundreds of species of fish. Santa Claus can talk to every animal, which is why he enjoys his trips to the African continent so much. There are many animals for him to talk to and deliver presents to.

One of Santa’s favorite animals to talk is the drill monkey, which native to Nigeria, and it is only found in one other country – Cameroon. Drill monkeys are very shy but when the warm up to you they give the biggest smiles. All the drill monkeys love Santa and every year they even draw the words ‘barka dà Kirsìmatì’ in the sand which means Merry Christmas in a native language called Hausa. You can learn all the ways to say Santa Claus on our Santa Claus names from around the world page. This Santa Sighting in Africa is sure to amaze ever visitor, just like it amazed Charlie when he spotted Santa Claus in the sky.

Check out our other Santa sightings from Africa.